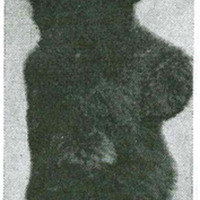 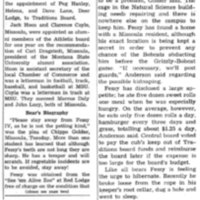 In October of 1946, Fessy IV, the last of the mascots named Fessy, arrived at UM. Fessy IV was on loan for the football season from the See’Em Alive Zoo in Red Lodge Montana. He lived in town with an undisclosed resident. Fessy IV was known to have a nasty temperament and, according to trainer Chippo Golder, students were told to “stay away from Fessy IV, as he is not the petting kind."