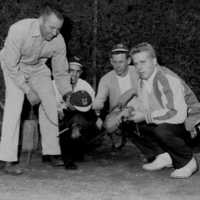 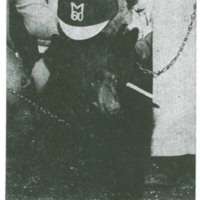 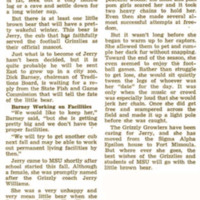 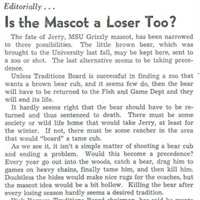 In the fall of 1956, ten years after the last Fessy retired, a new female brown bear arrived to serve as the UM mascot. Jerry, named after football coach Jerry Williams, was on loan for the season from the Montana Fish and Game Department. While serving as mascot, Jerry lived off campus, first at the Sigma Alpha Epsilon fraternity house and later at Fort Missoula. At the end of the football season, a controversy erupted regarding Jerry’s fate post-mascot. The bear was too tame to be returned to the wild, and the Fish and Game Department suggested that she be shot. Ultimately, ASUM was able to find a zoo back east to take the bear, and her life was saved.